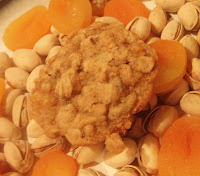 Last night I discovered a great oatmeal cookie recipe (for the oat-loving horse in me). I had bought a bag of pistachios from the grocery store last week since they were on sale. I have previously been rather indifferent to pistachios. I ate them if they were around, but didn’t get too excited about them. A few months ago, however, I had a salad at Soups On! in Baltimore that came with pistachios on it. It was so delicious, and this little green nut has been on my mind ever since. So I was thrilled to find them on sale.

This recipe made about 30 cookies for me. They’re small and delightful, and crispy-chewy after they’ve cooled a bit. I never thought of putting apricots and pistachios together before! Hope you like them.

Beat together butter and sugars in a large bowl with an electric mixer at medium-high speed until fluffy, then beat in vanilla. Add egg and beat until combined well. Stir together flour, baking soda, salt, and cinnamon in a small bowl, then add to dough and mix at low speed until just combined. Fold in oats, apricots, and pistachios.

Unknown said…
that sounds yummy Becky! I seriously need to start trying out your recipes. I love how unique they are!
May 20, 2009 at 9:41 AM 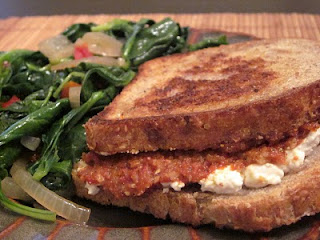