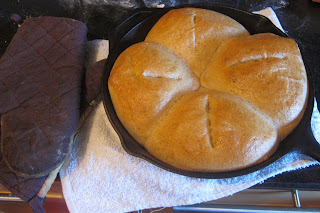 Here's your weekend baking project, all ready to go. All you need is flour, salt, water, yeast, oil, and a big cast iron skillet. I've made this bread three times so far, and it has turned out great each time. It's good for a weekend when you plan to be in the kitchen, because it takes a few hours and is a hands-on kneading bread. 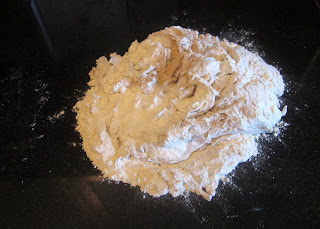 The recipe is from a magazine my mother-in-law passes on to me: Mary Jane's Farm. It's a mix of crafty projects, rural living, and home-style recipes. This recipe called out to me because of my new cast iron skillet (compliments of my aunt) and because of the neat little quarters that I could easily tear off and give away or freeze for future. 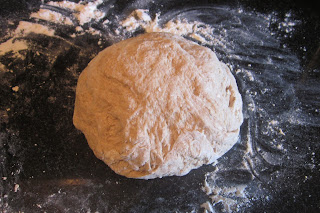 We overspent our food budget in December, and part of getting back on track has been making our own bread. A bag of high-quality King Arthur Flour is around $5. A loaf of high quality artisan bread is around $5-6. I'm not sure how many loaves of bread I can get out of one bag of flour, but it's at least three. And oh! the rewards of smelling the fresh bread baking, of pulling it out of the oven and cooling it on the counter, of tearing off a piece to have with soup, eggs, or just because. It's more than just the money savings. 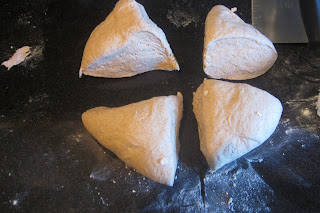 I adapted the recipe slightly to include half whole wheat flour. If you have bread flour (either whole wheat or white) that would be best, but you can certainly make successful bread with regular flour. 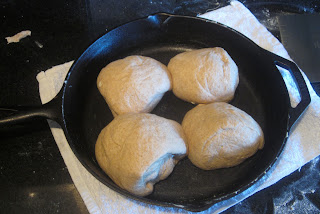 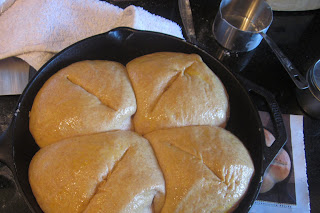 1. In a large bowl, dissolve yeast, sugar, and water. Wait about 5 minutes to let the yeast bloom.
2. Add oil, salt, and half of the flour. Mix well, then add remaining half of flour. At this point, you'll probably have to dump it onto a floured counter to knead by hand. It will be a flour-y mass that doesn't look like much, but it comes together to form a smooth ball of dough.
3. Knead for 3 minutes, and let the dough rest (covered) for 10 minutes. Repeat this cycle four more times: knead 3, rest 10 (for a total of five times).
4. Rub butter over the bottom and sides of a 12-14" cast iron skillet. Divide dough into 4 equal pieces. Form into 4 balls of dough and place into skillet. Cover with dish towel and let rise until double. This usually takes a couple hours in my cool kitchen.
5. Once the loaves are risen, brush with a beaten egg. (This step is optional. It makes the top of the loaf golden and crisp, but you don't have to do it). Slash each quarter down the middle with a sharp knife. Sprinkle with sea salt.
6. Bake at 350 degrees for about 30 minutes, or until golden brown. 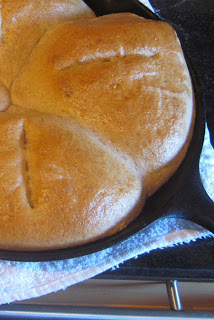 Becky, I was in love with this bread when you made it for mealshare and I am finally trying this today! I just shaped the loaves and placed them in the cast iron.

Nice! I haven't made this in a while and am glad for the reminder. Hope it turns out well. 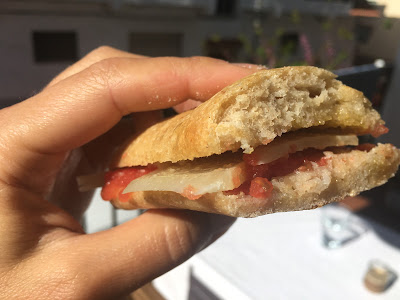