Cooking with the Mayor 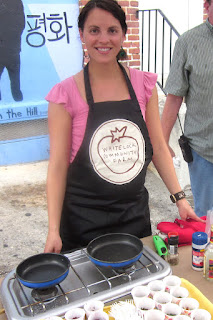 What's that? The mayor? Yes, we had a cooking date Thursday evening. Surreal, right?

It all started with the Whitelock Community Farm, which is an urban farm a block from my house that I am involved with. For the past two years, the bountiful produce has been sold on weekends right at the farm. This year was the start of a small CSA (community supported agriculture) and expanding to another market in Baltimore. Last week, however, marked the kick-off of selling produce at a corner store in the neighborhood that is mostly frequented for sugary desserts, salty snacks, and high-fructose corn syrup laden beverages. The few canned goods it carries are dusty on the shelves.

This is a partnership and pilot program with Johns Hopkins University (read more in this article), with the goal being to deliver real food to low income neighborhoods and make it accessible. Selling the produce every day at the corner store helps make it easier for people to get fresh vegetables, especially if they don't have a car to go to the grocery store in another neighborhood. Even with a rather comprehensive bus system in Baltimore, it's difficult to lug a bunch of grocery bags back without a car. 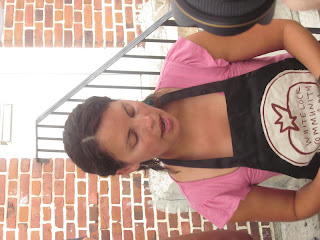 Which brings me to cooking with Mayor Stephanie Rawlings-Blake. As we planned this kick-off event, which would involve the farm, Hopkins, the city, and various other bigwigs, we decided to showcase how tasty Whitelock vegetables are. Board members volunteered to make various recipes, such as dips and quiches, so people could sample the produce. I volunteered to do a cooking demonstration using farm produce. Innocent, right?


Then it turned into cooking with the mayor. Then not, because she was on a tight time table. Then yes, because the plans changed. It was quite the whirlwind.

I set up the tent, lined up my ingredients, and checked the two-burner Coleman camp stove to make sure everything was in order. Then Madam Mayor arrived, and I started chattering away about what's her favorite vegetable? (spinach, cooked in cream) and today we will be cooking swiss chard with raisins and pine nuts, while thinking -- look at her, look at the audience, don't let the food burn, smile, don't make a mess, I hope this turns out as well as it does in my own kitchen. 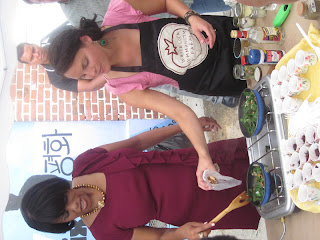 Thankfully, the food tasted fine, there were no mishaps, and she even ate some after and said it was delicious. Whew. Glad I got through it. They went on to speeches and I got back to being out of the spotlight. I'm proud of Whitelock Community Farm and everything that has been accomplished in just two years.

The other cooking demonstration recipe I chose to make (post-mayor) involved red beets and Swiss chard. It turned out very nicely, and even people who claimed they don't like beets said it was tasty. The recipe is adapted from Food52. I wanted to make the recipe more accessible to any type of cook, so I used white wine vinegar mixed with water instead of white wine, and regular onion instead of shallots. I also did not use beet greens, since many people don't buy beets with the greens still attached. The recipe recommends pairing with it a nice crusty bread and Boucherondin cheese (a semi-aged goat cheese). And wine. Which just sounds fabulous.

Wow, Becky that is quite a story.

Woohoo! Excellent :) So excited for you!