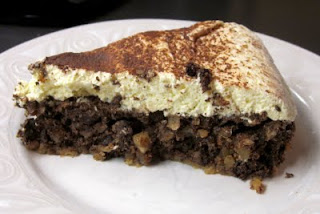 Is it really the middle of May already? Where is this month going? I don't have much time left to share with you May's egg recipes. Writing "May's egg" reminds me of my sister, whose name is Megan, because whenever she made eggs I liked saying "Meg's eggs." Life's little pleasures.

You might be wondering why I'm featuring a torte under this egg-themed May. When you think of eggs, do you only think of savory? Think again! This torte has seven egg whites in it. Egg whites are all that's holding it together. This allows the true chocolate almond flavors to shine through.

I'm also giving you a bonus recipe of Bavarian Cream, which uses a bunch of egg yokes, and is shared by my friend Sarah. This way you can have a dessert fest and make one egg white dessert and one egg yoke dessert. Other dessert recipes that use egg yokes include ice cream, pudding, and some cakes.

1 cup (5 ounces) whole almonds
7 ounces good-quality unsweetened chocolate, roughly chopped
1/2 cup sugar
Position rack in lower third of oven and preheat to 350 degrees. Grease the sides of a springform pan and line bottom with parchment paper. Combine above ingredients in a food processor and pulse until finely chopped but not pulverized.

1/8 teaspoon salt
7 large egg whites (about 1 cup, but I didn't measure)
1/4 teaspoon cream of tartar
1/2 cup sugar
Using a stand mixer or hand-held mixer, beat the egg whites with cream of tarter until soft, moist peaks are formed when the beaters are lifted. Gradually add sugar and continue to beat until the egg whites are stiff but not dry. Add 1/3 of the chocolate nut mixture to the egg whites and fold in with a large rubber spatula until nearly incorporated. Fold in half of the remaining nuts, then fold in the rest.

Scrape batter into prepared pan and spread evenly. Bake torte until it has risen and is golden brown and a toothpick inserted comes out cleanly, about 30 minutes. Set the pan on a rack to cool for 10 minutes, then remove the sides of the pan and invert cake onto the rack. Cool completely. Store up to 3 days, airtight, at room temperature. Serve with whipped cream and cocoa powder. 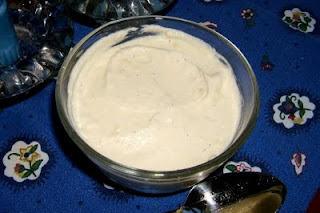 6 egg yokes
1 cup sugar
Whip together until light and foamy, then slowly stir into hot milk. Pour into a pot and stir over medium heat until mixture thickens.

1 1/2 ounces powdered gelatin
2 cups heavy cream
Dissolve gelatin in milk mixture, then remove from heat. Allow to cool, stirring from time to time. Whip heavy cream until thick. When the custard begins to set, carefully fold in whipped cream. Divide into individual bowls and allow to set for at least 3 hours in the fridge.


Other posts you may enjoy: