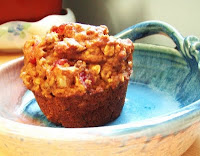 Happy Autumn! In honor of the new season, I'm posting some very delicious, very Autumn muffins. These muffins were first made in honor of my cat, Benjamin. He had to be put down in August because he was very sick, and the medical treatment was more than we were able to afford. Before he got really sick, the vet suggested that I add pumpkin to his food to give him extra fiber. I had just started doing that before he died a couple of days later. Since I had a bunch of pumpkin in the fridge afterward that I didn't know what to do with, and because I needed a task to bring closure, I decided to make pumpkin muffins and name them after Benjamin. When Benjamin was alive, he used to flop down on the kitchen floor and hang out with me while I baked. He was good company.

These muffins are super moist because the pumpkin adds so much to them. There's no need to use butter when you have a main ingredient like pumpkin. You could also substitute sweet potato. The muffins are very high in fiber, not only from the pumpkin, but also from the cranberries, whole wheat flour, oats, and nuts. I was pleasantly surprised with the combination of flavors. Hope you enjoy them. And do take a moment to think of Benjamin while you make them.

2) Mix together dry ingredients in large bowl. Make a well in the center; set aside.

3) Mix together wet ingredients, including pumpkin. Add to dry ingredients and stir just until combined.

4) Fold in pecans and cranberries

And the new design looks good!

I’m starting a thankfulness series. Day 6 here in Spain of the quarantine, and gratitude makes a big difference. I am thankful for the bea... 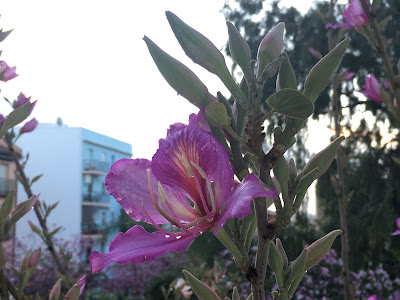